Why Philip Brailsford Is A Murderous Piece of Shit And Deserves To Die.

As usual, I shouldn't need a disclaimer, but people are stupid.

I support the cops, WHEN THEY ARE IN THE RIGHT.┬á This includes shootings that outrage a lot of people. Mike Brown, for example.┬á Good shoot. Punk had it coming.

So let's look at this one and detail why┬áPhilip Brailsford is a retard, a sociopath, and deserving of the worst fate imaginable.

Now, here's the pig in question.┬á Looks like some hyped up CoD player trying to be a badass: 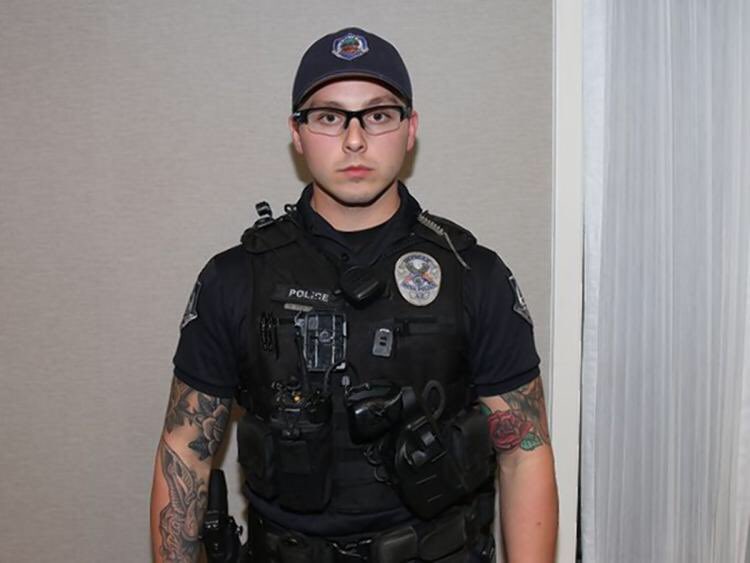 The press, btw, chose to edit the photos not to show the tattoos.

"The judge did not allow jurors to hear about an etching┬áon the dust cover of the rifle Brailsford used to shoot Shaver, which said┬á "You're f--ked," because he felt it was prejudicial."

It should be prejudicial. If you or I had that dustcover on a rifle, it would be considered provocative.┬á And note, he modified his issued duty weapon with this. That takes tools, it's not just a drop in, and is against department policy. Only the armorer gets to modify weapons. EDIT: apparently his personal weapon, which is supposed to meet specific department standards. Since they cited the dust cover as part of the reason for his firing, clearly that wasn't within standards.

This is a dickless little pussy, trying to look like a badass, with a hardon for shooting someone.

Now, watch the video above.┬á What should have happened:

Interspersed with threats to shoot him if he doesn't perform some odd contortions that a trained gymnast can't do.

The department found his behavior, and the modified weapon, against policy to be grounds to fire him.┬á Clearly, they did not think it was a good shoot.

Now, pay attention to the shot. Well, actually, it's a burst, which is criminally negligent under the circumstances, since there are lots of walls and lots of potential collateral casualties behind thin walls.

No, he's placid.┬á Like shooting someone is just second nature, like walking past them on the sidewalk. He's completely unfazed. It's like he was shooting targets at the range, waiting for the next popup.

The suspect in question had no weapon. Someone had reported seeing a firearm through the hotel window, which is, (gasp!) legal in Arizona. In fact, it's legal to carry a gun openly in AZ with no license.┬á So they shot this law abiding citizen for not doing anything illegal. (It was a pellet pistol he used for pest control, professionally.)

I won't comment on the other cop who's too stupid to know which way a key card goes in a hotel. As someone else noted, apparently his hookers come to the house.

Now, per existing law, "I'm an incompetent, retarded, trigger-happy shithead who created a bad scenario and twitched, despite overwhelming firepower" is actually a legally valid defense for a pig. Don't try it yourself. You'll get life. (Unless you're an illegal alien in San Francisco, but I digress).


But it doesn't change the fact that this tatted up, sociopathic pig went into this event just begging to shoot someone and got his wish. He can have his mouthpiece claim otherwise all he wants.┬á The evidence is there.

Which is why I will cheer if someone hunts the fucker down and assfucks him with a shotgun.

In the meantime, the victim's family is going to sue, and own Mesa's budget for the year, and the taxpayers will pay for the bad judgment.

And his murder victim is still dead.

At least the department fired him. I credit them with decency for recognizing the fuckup. And note again, they obviously thought it was a problem.


Then, how often do prosecutors bring charges against their cop partners? Not very often. They obviously thought it was a problem.

Yes, there's a loophole that allows a cop to murder people and say "My bad!" and walk away. That does not make it a "good" shoot. There was zero reason to have a fucking dance with the suspect.┬á The longer that dance goes on, the more likely it is someone will die.┬á

Which is what this little pussy (and possibly his partner) was just BEGGING for.

If you're a copsucker and this post offends you, go on Grindr and find some cop cock to suck. There's plenty.

Circuit Judge Karen Henderson dissented, arguing in a footnote that:

Wait, you "Assume"? Based on what evidence or precedent? In other words, you admit you couldn't be fucking bothered to actually familiarize yourself with the subject.

So how are you "certain" of anything, you festering cunt?

Get the fuck off the bench, you are a worthless piece of shit.

On these National Socialist shitbags calling themselves the "Hamilton Electors." ┬áFirst of all, trying to control the narrative by the language is a textbook radical move, and it's bullshit. You're┬á
"A Bunch of Pussies Outraged At Your Revered Candidate Losing The Election," and you would be regardless of party. ┬áMoving on.

Here are just a few of the highlights of our achievements over the last month:

In response to our efforts, the┬áRepublican National Committee had to perform an unprecedented ΓÇÿwhip countΓÇÖ┬áof Electors to make sure they would vote for their partyΓÇÖs nominee.┬á┬áIn response to that, members of the┬áPresident-ElectΓÇÖs campaign team illegally threatened Electors┬áwith consequences, which may help make the case against Trump during forthcoming impeachment proceedings.

In response to your harassment, they had to ensure the harassees were not intimidated. ┬áAs for your impeachment dream, it will be as successful as every other impeachment of the last four decades. You lost. Grow up. I notice you don't mention the death threats and bribe offers your side offered if they didn't "do the right thing," i.e. agree with you after you LOST THE ELECTION.

They cover people who marry their toasters too, and obviously, their support made zero difference to your efforts. YOU FAILED.

Over 5,000 online news articles┬áwere written discussing the Hamilton Electors, and we even held the┬átop headline on Drudge Report for over 24 hours. ┬áElector Chris SuprunΓÇÖs opinion-editorial, which we helped place, was the┬ámost read and emailed story for over 24 hours┬áon one of the worldΓÇÖs largest newspapers.

And as above, it made zero fucking difference. Why are you boasting about publicity of your failure? ┬áDoes a failure become less of a failure with media coverage?

Our message was┬áΓÇ£trendingΓÇ¥ on Facebook, Twitter, and YouTube┬áduring the course of the month in response to our campaign, including #ElectoralCollege and #Dec19. ┬áΓÇ£Hamilton ElectorsΓÇ¥ as a phrase didnΓÇÖt exist a month ago, and now it has┬áover 326,000 results on a Google search.

Ah, the internet generation, imagining that tweet numbers are relevant to anyone except twits.

ZOMG! You hung out with fabulous washouts, and losers I've never heard of, who have no political training, pull or relevance. ZOMG! And you FUCKING LOST. So perhaps not something to boast about?

We helped our allies at the December 19 Coalition stage┬áunprecedented pro-democracy rallies at all 50 statehouses┬á(and D.C.) on the day of the public Electoral College proceedings. ┬áWhen we started, most people didnΓÇÖt even know that the Electoral College met in person and where they met, which makes thousands of people all across the country showing up even more impressive.

America, a Republic, has had pro-democracy rallies before, so this is not unprecented. And in your case, it made zero fucking difference and YOU STILL FUCKING LOST. Impressively, it seems.

Most importantly, we let all Americans know that┬áit's normal to stand up to the person occupying White House, and┬ástarted a conversation about the legitimacy of a Trump Presidency┬áthat will continue until he is no longer in the White House; hopefully, the steps we take in the weeks and months ahead will result in his removal from office.

You mean, it's normal to do so, IF HE'S WHITE, right? Because doing so the last 8 years was "Racist," because a black president changes the rules, and somehow that isn't racist.

As far Trump's presidency, he won the election, and he will be president, and that's as legitimate as it gets. That a bunch of racist, losing, failing Democrats (but I repeat myself redundantly) disagree has no effect on the legitimacy.

Grow the fuck up, you worthless pussies, and get back to work to pay taxes to support my free medical care you voted for.

A Friend Calls The Match Perfectly

Boris Karpa┬ásays:┬áTrump's life experience is - so far, this is what Trump knows from his actual personal life - that you can do all of the things that for many years people have told us you cannot do if you want to have a career in business, much less be President.

Again - none of these things I hold against Trump. I THINK THEY ARE AWESOME. If it is proven tomorrow that Trump's wife was really an Escort *I WILL ONLY RESPECT HER MORE*.

But for many years the media taught us doing these things will destroy anyone's job, much less career.┬á

Then Trump insulted the media - not just 'said controversial things,' ┬áhe deliberately trolled, insulted, and humiliated most of the nation's mainstream reporters.

He also said things that he knew would be seen and portrayed - by a media he deliberately made hostile - as being racist.

And now not only did he not suffer any consequences - he is, in terms of personal success [I'm not passing any judgement on his policies] THE MOST SUCCESSFUL HUMAN BEING ALIVE.

He is a wrestler, TV star, billionaire President with a supermodel wife.

And as he looks out upon his enemies, he sees they're not just defeated, they're having epic breakdowns. Some leftist pundit has actually DIED of heart issues due to his winning. Thousands of his enemies are literally requiring therapy right now due to him merely being elected.

How the hell are you going to take a man who ha ascended to the highest level of personal success experienced by any person alive, while breaking all the rules of politics - and now INTIMIDATE him into being scared of people who are literally CRYING AND NEEDING THERAPY due to the sheer shock of him defeating them?